The journey of transitioning to a Shape Up methodology 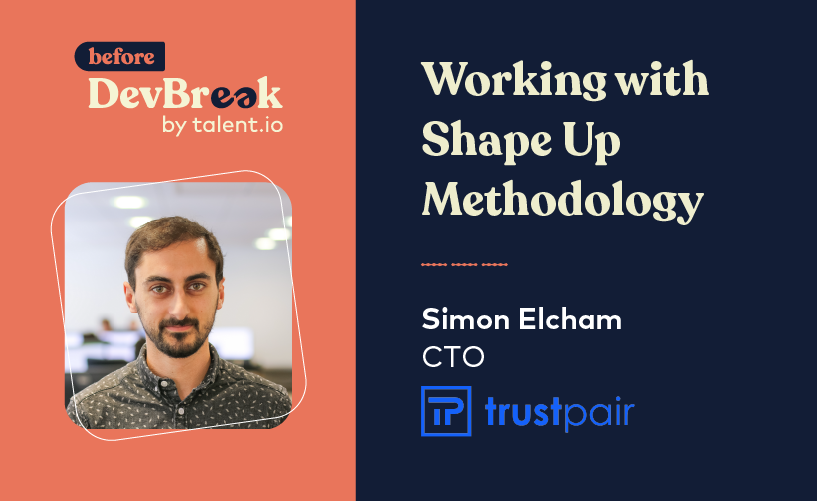 In this episode of Before DevBreak, we host Simon Elcham, the Chief Technical Officer at Trustpair to explore the anatomy of the Shape Up methodology and how you can tailor it to your organization’s unique needs.

In many cases, Trustpair struggled to deliver features on time. They were also slowed down by sprints that spawned numerous questions. These tended to come with additional pressure that manifested in a lack of vision. This mode of work where team members didn’t know exactly why they were developing certain features ultimately resulted in features that customers didn’t really need.

Using the classic Agile Scrum approach, they were doing everything in Gitlab, with multiple open issues at a time. They also alternated roadmap review periods from a week to three weeks, eventually settling on two weeks.

This methodology also came with specific sprint problems such as limited time to design each feature correctly, leading to a pile up of technical debt. Developers would start to feel passively involved as they play catch up with each ticket that comes in. Agile Scrum often resulted in unfinished tasks spilling over to the next sprint repeatedly, and distraction from too many meetings.

Responding with Shape Up methodology

The anatomy of Shape Up

The initial phase is the Shape phase, followed by the Build phase, then the Cool-down phase. During the 6-week Shape phase, you define a rough solution to a request with minimal details, establishing the scope of what you need and don’t need. It’s also the time to figure out the risks and pitfalls that could send you spiraling out of control.

The Build phase also lasts six weeks and it is the part where you assign a project to a team and give them full responsibility. The project is then split into smaller scopes and building features commences.

For larger features, this is where the work is broken down so as to ship parts of the feature in intervals. This is why the Build shouldn’t be too detailed because there is room left for team members to decide how to implement.

The Cool-down phase happens between the Build and Shape phases and typically doesn’t involve scheduled work. This is the time to look back on the work done, fix bugs, ponder on the next activity and come up with new ideas. It’s also the time to refine the way you work.

📹 To learn more about the nuances of the Shape Up methodology and how you can tweak the manner in which you apply it within your organization, watch the full talk here.

Before DevBreak is a series of live, online, tech talks. Each session features a senior tech expert from an innovative company, who demonstrates how they solved major programming challenges in their business. This series is part of DevBreak, the ultimate 2-day tech festival organised by talent.io.

Other articles picked for you